What a summer it’s been so far.  I’m not sure about all of you, but up here in Muskoka, we’re having the best weather ever!  Have you been reading lots I hope?  If not, maybe I can add another book to your TBR pile.

I’d like to introduce you to another talented author who’s in the hot seat today.  Please welcome Marie Dees, author of the Lucifer’s Boys series with Liquid Silver Books.  A little birdie told me you hang out with ghost hunters to do book research.  What’s that all about?  What kinds of things have you done with them, and what have you learned?

I love watching ghost hunting shows on TV and wanted to bring that into the mystery novels and some of the romance stories. If you’ve ever seen Ghost Hunters on SyFy, you know they bring in tons of equipment to find the ghosts. I needed to know about the equipment. The ghosts were sort of a bonus. I spent a year going on investigations with a group, learning how to run wires and listen for EVPs (electric voice phenomena).

I experienced some things I couldn’t explain and had lots of fun. But the truth is that the scariest part didn’t involve ghosts. It was sitting in the dark in the tiny elevator equipment room of closed hotel and thinking “there could be rats in here.”  There were three of us. We were supposed to stay there for forty minutes. After about twenty with no ghosts showing up, we decided to move down to the attic which was more haunted but at least had enough space for the rats to stay out of our way.

Oh yeah, that would creep me out.  Not the rats or the ghosts so much as the confined space.  Yikes.  Have you ever done what the author t-shirts threaten and written somebody you dislike into a story?

Actually, yes. Often my characters reflect traits of people I know or have known. But there was one case that is special to me. I worked for a man who only seemed to be comfortable when able to follow and enforce defined sets of rules. He was a very conservative person never able to see outside his own perspective. In “Angel in the Middle” I modeled Raguel, the overseer of other angels, after him. Raguel is responsible for Darius being kicked out of heaven even though poor Darius hasn’t really had a chance to actually “fall” yet. Unfortunately for Raguel, this gives Lucifer the opportunity for a little amusement.

Ooo, sounds intriguing!  I’ve dabbled in a bit of angel and demon fun myself, so I know how much fun that can be.  😉  Are there any other fantastic novels waiting to burst free from your imagination in the future?  Can you tell us about them?

Ack! Too many projects! Right now I’m working on a third novel for the Cassadaga Mystery series. There’s also a M/M fantasy romance in the works and a more of a regular fantasy novel I’m playing with. And Tribal keeps yelling at me because I haven’t written the third for the Lucifer’s Boys series for him to be in.

I’m so glad I’m not the only one bombarded with stories to write.  Great, isn’t it?  Tell us about your road to publication.  Was it short and sweet?  Long and winding with many bumps?

More the long and winding road. My teens were devoted to a long and rambling Tolkien-inspired fantasy trilogy (because fantasy had to come in trilogies) that was never finished and never will be. Eventually I realized I sort of needed to learn how to actually develop a plot that included an actual end to the story. So, I took college writing classes. Earned my MA in Creative Writing, but that required writing literary fiction. But that left me with the rambling, unfinished fantasy trilogy and a collection of literary short stories, which wasn’t what really called to me. So, it took time to find my way to what I wanted to write. I’m having more fun with my writing now than I ever thought possible.

I think most of us go through dabbling until we find our loves, am I right?  I’ve recently made a shift with the direction my writing’s going to take, and I’m probably not done yet.  It’s not wasted time, just time well spent discovering who we are and what drives us.

There are a lot of stereotypes cast in a romance novelist’s direction, like they must sleep in slinky lingerie when most I’ve met are dressed from head to toe in flannel jammies when they hit the sack.  Are you a warm and comfy girl?  Or an in-the-buff or silk and satin kind of girl?

I have to admit, I’m more the warm and comfy type. I have an odd love of blankets and comforters and they end up scattered all over the house. When bedtimes hits, I’m usually in something old and comfortable and snuggled under the comforters. Midway through the night, I wake up freezing to discover that the comforter is no longer on the bed but on the floor under the cocker spaniel. So, I have to keep extras nearby.

Ha!  Cover hogs and I wouldn’t get along so well, but it looks like you have a plan.  🙂  How much of you is in your heroine?

“Surprised?” Elizabeth sounded amused. “I’ve just witnessed two jaguars turn into naked men and then kiss. I don’t know if I need a cup of hot tea or a cold shower. Now get out of my way.”

Definitely a cold shower.  Whew!  Who isn’t down with a couple of hot shifters? Yum!

What does your dream house look like, including an ideal oasis from which to write your masterpieces?

I would have a small thatched cottage surrounded by a pleasant garden. The sort of cottage Agatha Christie’s Miss Marple would live it. I would write and sip tea and wander out to tend to my perennial borders when I needed to have a little think.

Sounds positively divine.  Simple and comfortable has always made more sense to me than grand and expensive, especially if you’re a pet lover.  Speaking of pets, if you could live your life as an animal, what would it be and why?

Well, looking around the living room right now, being a cocker spaniel seems like a good idea. Besides, think of all the comforters I could steal.

That would be the life, wouldn’t it?  Except it would be pretty hard to type with paws.  🙂  Check out Marie’s latest tasty morsel, Demon Bait. 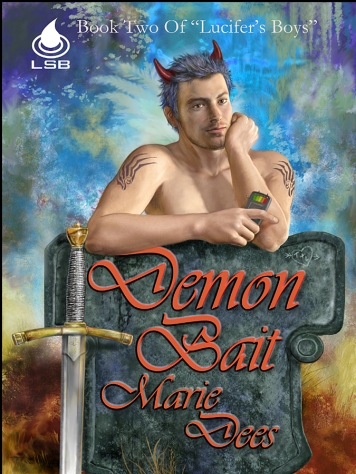 Back of the book:

St. Augustine, Florida, is known for its ghosts and Lorenzo is one of them. He’s spent more than a century as a resident of Tolomato Cemetery. But he isn’t able to rest easy in his grave since Lucifer insists on resurrecting him regularly to offer him a job. While he can’t escape being condemned to Hell himself, Lorenzo refuses to help send others there. Lucifer is irked when Lorenzo refuses him once again and turns to Tribal, an oversexed demon who has solved these types of problems before. Tribal has a solution to his Master’s problem. He plans to tempt Lorenzo with the one thing the passionate Spaniard can’t resist–a lover.

Who better to catch a ghost than a ghost hunter? Tribal baits his trap with Tom, a hunky and lonely ghost hunter. When Lorenzo refuses to give into Tribal’s plan, the demon resorts to a dangerous trap that puts Tom’s soul in danger, and Lorenzo must defy Hell itself to save him.

M/M sex, including submission and spanking.

You can find this little lovely here: