Books, books, and more books!  I have another fantastic one to share with you today.  Check out the deets, and don’t forget to enter the giveaway for a terrific prize pack at the bottom of the post. 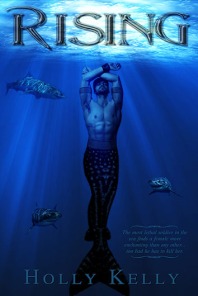 Synopsis: In a war between the humans and the inhabitants of the sea—humans will  lose. Xanthus Dimitriou—the most lethal Dagonian to rise from the ocean—is on a mission to save mankind from annihilation. But first there’s one small thing he needs to do… kill a beautiful young woman in a wheelchair.

Killing her doesn’t start out as part of his plan. He entrenches himself deep in the human world. Aligning himself with his enemies, he prepares to send them to Triton to face their punishment. Then Sara Taylor rolls onto the scene. Xanthus knows at once she’s a criminal. And her crime? Being born. She’s a human/Dagonian half-breed, an abomination. Killing her should be an easy job. All he has to do is break into her apartment, slit her throat, and feed her body to the sharks. Simple, right? Wrong. If only she weren’t so beautiful, so innocent, so sweet…

Saving the world may have to wait. It appears Xanthus has a woman to save. But protecting her may cost him his own life.

Holly Kelly is a mom who writes books in her spare time: translation-She hides in the bathroom with her laptop and locks the door while the kids destroy the house and smear peanut butter on the walls.

Holly was born in Utah but lived in Salina, Kansas until she was 13 and in Garland, Texas until she was 18. She’s now back in Utah–“happy valley”. Holly is married to her wonderful husband, James, and the two of them are currently raising 6 rambunctious children. Her interests are reading, writing (or course), martial arts, visual arts, and spending time with family.

There is an international tour wide giveaway.

Now that you’re all signed up for the giveaway, here’s a little teaser for your Friday morning.

He knew what he had to do, what he’d done countless times before. As a trained soldier, he had a sacred duty to protect his people, guard their secret, and uphold the law. This female’s presence here was not only a criminal act, but it also presented an imminent threat. And because of that, his course was clear.

He had to kill her.

His plan lay clearly before him. Blanketed in the shadows, he’d enter her apartment window. Moving silently, he’d strike fast. Before she could cry out for help, he’d have her throat slit wide open. With her blood flowing swiftly, she’d be dead in mere seconds. The fact that she bathed at this time added to the ease of the execution. Clean up would be simple. Before the night ended, it would be as if she’d never existed. The Dagonian threat of exposure would be wiped clean from the human world.

Xanthus stood, his feet rooted in place under her window. Her sweet scent surrounded him as he listened to her pitiful sobs. Then, in that moment, he did the most shameful thing he’d ever done in his life.

He made his way back to his vehicle and climbed behind the wheel. He leaned his head back against the seat, closed his eyes, and attempted to clear his head.

He’d be back and she would die. She deserved to die. She may have the voice of an angel, but that was a lie. She was a traitor, a threat to their people. No other explanation made sense.

He felt someone near just before a fist rapped on the glass. A big, filthy man with wild hair motioned for him to roll down his window.

As soon as the glass lowered, the barrel of a high-caliber pistol poked inside. “Give me all your money and I won’t hurt you,” the man growled.

“Put away that gun and I won’t hurt you,” Xanthus said, his voice low and menacing.

The man didn’t seem too impressed. “Yeah man, right. You might notice I’m the one with the…” Before he got the words out, Xanthus had the gun out of the man’s hand and pointed back at his face with his windpipe clenched in his fist.

“Hey man, I was just joking,” the human choked out.

“Just walk away. And don’t come back. If I see your face anywhere near here again, I’ll kill you. Do you understand me?”

The man’s eyes widened in fear. “Yeah, yeah, I hear you,” he said, just before Xanthus released him and he escaped into the darkness.

Xanthus looked toward the little female’s apartment building across the street. Could she have found a more dangerous place to live? He placed the gun in the glove compartment. He shouldn’t have let the gunman live.

This Dagonian female probably felt at home with these bottom-feeders.

Probably? Aw Hades. He cursed himself and the doubt in his mind. He doubly cursed that he couldn’t seem to stop himself from caring about her welfare. He’d be killing her himself, after all. The traitor had to die, regardless of his feelings and no matter how appealing she was. Of course if she died by a human’s hands then he wouldn’t…

He shook his head at his own idiotic thoughts. If a human killed her, then her body would be taken to the morgue, for the humans to see. He couldn’t let that happen. He had to be the one to kill her and carefully dispose of her body. And he would, soon.

One thought on “Rising by Holly Kelly #PNR #giveaway”