Last week the hubby had some business in Toronto for a couple of days, so Wee B and I tagged along for a mini vacation opportunity.  Although our 5 year old has been across the top of the city (via the 401 to Grandma’s house) before, she’d never actually been right down town.  It was fun to see her marveling at the tall buildings, endless sidewalks and bright, flashy lights.  People really live all the way up there in those towers?  But where’s their backyard?  And the trees where they hang their hammock?  And their fire pit for campfires?

I think she has a new appreciation for where we live.

So, we land at the Ramada Wednesday night on Jarvis street which just happens to be right smack in the middle of the red light distract.  Nice, right?  Believe me, the hotel wasn’t our choice, but when it’s free, I don’t tend to complain much.  For a little local culture, we thought we’d take Wee B for a walk down to the Eaton’s Centre to see the giant Swarovski Christmas tree.

About ten steps out of the hotel door, we happen upon two men cracking one another in the skulls, grunting and cursing up a storm as they landed their blows.  A hooker in a black skirt so short that it barely covered her butt cheeks looked on at what we assumed to be her pimp and a john.  Stunned, we just stood there like idiots until it finally broke up and we’re able to keep walking.

The inevitable question comes:  Momma, what were those boys fighting about?  Uh … I guess they just had a disagreement, or … something.  I mean, what do you tell a little girl that’s too perceptive for her own good?  She seemed to buy my explanation to my relief, though she eyed the hooker with obvious suspicion.

The next day Hubby went off to hi

s event and Wee B and I headed off to the subway station for her first underground train ride.  It’s been about eight years since I’ve ridden the subway, and I just about fell over when I saw the price of tokens.  However, we paid our money and climbed on a flashy new subway car.

Besides having to deal with the rush-hour crowd so thick we were standing in the aisle like a couple of sardines, and I would have fallen on her at the next stop if some nice old man hadn’t grabbed me from his seat, Wee B seemed to enjoy it.  Even better when said nice old man got up and gave us his seat.  🙂  Thanks, whoever you are! 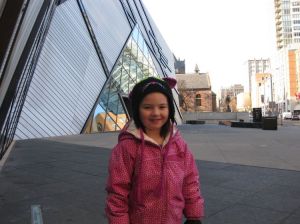 Mid-morning, we arrived at the ROM, or Royal Ontario Museum for those of you who are wondering what the heck I’m talking about.  Wee B is infatuated with dinosaurs since watching Dinosaur Train, so that’s what we went for.

I hadn’t been to the museum since elementary school, and no, I won’t tell you how long ago that was!  It was a lot more fun than I remembered.

They had so many dinosaur bones and little activities for kids, we spent an hour and half going through them all.

She even got to go excavating for bones!  How neat is that?  As she uncovered the bones, she had to guess what it was, then the nice lady helping us showed her on full skeleton what it actually was.

My girl could have spent hours and hours there at the three sites they offered.  One even held a full baby dinosaur skeleton she uncovered bit by bit.

A big fan of her rock collection, she got to pick out some polished ones from the gift store and take them home.  Of course, she picked out only pink and purple ones, being the fashionista she is.  🙂

That night after Hubby finished with his event, the three of us took off to the CN Tower.

She’s standing beside a miniature one here.  It was all lit up with red and green lights.

We rode up the external elevator (with glass panels in the floor, I might add) to the 117 story height of the main observation deck.  Yikes.  The best part of the whole trip for me was when Wee B looked out over the lights of the city and shouted:  Daddy, I can see the whole world from up here!

The two of them walked out on the glass floor that allows a glimpse straight down to the street level while I cowered in the corner with the camera.  They even went outside where the wind just about carried them away.

During this trip she asked me a lot of hard questions.  Why is that man laying on the sidewalk under a newspaper?  Why is that old man with the big bushy beard wearing high heels?  Why don’t many people here look like we do?  Why are there big fences around that bridge? (about the Bloor viaduct, where the city erected anti-suicide barriers)

It was a good reminder for me just how lucky my family is and also that I’ve been a bit lax about exposing Wee B to life outside of our small town.  The experience opened an excellent dialogue with her about hardship, different cultures and religions, and even some of the grittier stuff I’d like to pretend she never needs to know about.

All things considered, it was a most educational adventure.

6 thoughts on “Our adventures in Toronto”